There is little in common between Garden City High School between a pair of seniors who have excelled in their respective primary sport during their illustrious careers with the Lady Buffs.

Reagan Karlin stands 6-foot-1-inch tall and swats the volleyball over the net at a rapid pace and high velocity. Yazmin Vargas is but 5-foot-3-inches tall and hits softballs like bullets, ranges at shortstop to track down hard-hit grounders and also stands tall on the mound for her Lady Buffs softball team.

On Wednesday morning (Nov. 13), the first day of signing for 2020 NCAA national letters-of-intent, Karlin and Vargas shared one common denominator — that being they will be playing sports at the next level.

Karlin, who nearly two years ago had made a verbal commitment for her college of choice, signed with the Creighton Bluejays, a Big East Conference team that currently is ranked No. 14 in the latest NCAA College Polls.

Vargas, who had made her commitment in the summer of 2019, signed her name to play for Missouri Southern State University in Joplin, Mo., a NCAA Div. II school that competes in the Mid-America Intercollegiate Athletics Association.

For Karlin, the signing caps off one of her final actions of her senior year, which just recently was completed with a 33-5 season record, the third best record in school history for a single season.

There have been plenty of honors for Karlin, including two-time Class 6A first team all-state as chosen by the Kansas Volleyball Association (the 2019 team has yet to be named), and she also recently was named to the Class 6A state all-tournament team in Salina.

An outside hitter with tremendous power, Karlin pounded out 1,352 kills in her four-year career, capping that off with 393 kills this season. She was named to the all-Western Athletic Conference first team in her sophomore, junior and senior seasons, while earning all-WAC Player of the Year honors in 2018.

She was a three-time Garden City Telegram all-area selection, including Player of the Year for a 12-county, 18-team area in her sophomore season of 2017. In the four years of Karlin’s varsity career, the Lady Buffs posted a 120-35 won-loss record, including four WAC Championships and four trips to the Class 6A state tournament, a school record.

“It means so much, I’ve been waiting for this for a long time,” Karlin said following putting her signature on the letter-of-intent to attend the Omaha, Neb. university. “It just feels awesome because it’s a dream come true.”

Karlin, who also is an honor 4.0 student at GCHS, said the academic standards at Creighton were also an attraction.

“Academics have always been an important part of my education,” she said. “I need to go to a good college and get good grades. They told me they have a pharmacy program and that seems to be a good fit for me. And the coaches there are awesome, and I really got along with them.”

Karlin said originally that basketball was her sport of choice, but once exposed to volleyball, it became her first love.

“I found out I was pretty good at it and so I just focused on that over the years,” she said. “I’ve had a great career here at Garden City – great coaches and amazing teammates with lots of special memories.”

Lady Buffs volleyball coach Trista Bailey said coaching Karlin had been a special experience, seeing her mature and improve from her sophomore to senior campaigns.

“She’s a once in a generation player,” Bailey said. “She will certainly go down as one of the great ones here and it’s been a real pleasure and privilege to coach her.”

Vargas, meanwhile, is poised to break several more school records in the 2020 spring season when she will complete her final season playing for coach Trina Moquett.

She has been a three-year starter for the Lady Buffs, playing shortstop in the field and also handling some of the pitching duties for Moquett. 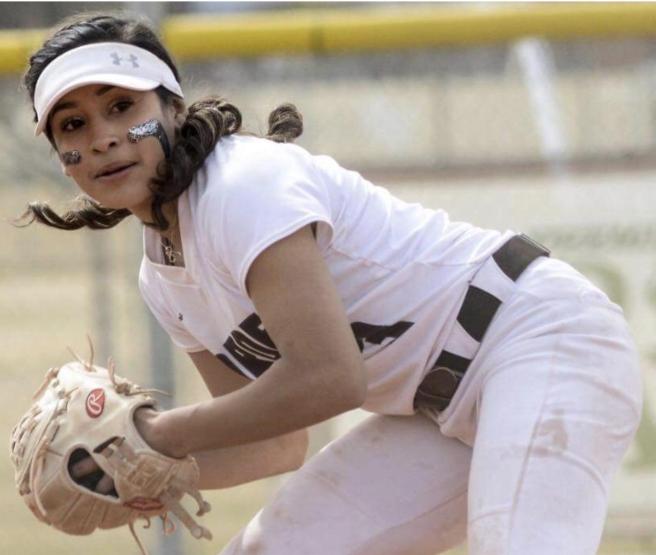 She has compiled 109 hits in her three seasons, 55 RBIs, a batting average of .509 and has 54 stolen bases in 59 attempts. She has a .938 field average and has posted a 2.96 earned-run-average on the mound while winning nine games against three losses.

During the three years of varsity softball, the Lady Buffs have won two WAC team championships and compiled a won-loss record of 48-16 with a highlight of a third-place finish in the Class 6A state tournament, the highest finish in school history.