After a disappointing opening night on Dec. 10 in Guymon, Okla., the Garden City High School boys basketball team bounced back to go 3-0 in the 2019 Roundball Classic at The Garden.

The Buffaloes, who are now 3-1 this season, started off the Classic with a 55-50 victory over previously unbeaten and Colorado state-ranked Palmer Ridge, Colo., on Thursday, Dec. 12. They followed it with a stirring 60-59 victory over Coronado, Colo., on Friday before finishing off the three-game sweep with a 54-42 triumph Saturday over Scott City’s Beavers.

In the Classic finale, the Buffs got another balanced scoring night with Tae Rosales leading the way with 15 points and Azavier Williams next with 13. Williams, who was named to the Classic’s All-Tournament team, hit the game-winning shot in that Friday heart-stopping win over Coronado.

Coach Jacy Holloway’s squad used a balanced scoring attack, and a deep bench to produce the three consecutive victories. No fewer than 9 players scored in two of the three games.

The Buffs have one remaining game on the 2019 pre-Christmas break schedule, that coming on Friday, Dec. 20, when they travel to Bear Creek, Colo. to face the Grizzlies in a return match from last year when the Buffs won on the road, 52-47.

The Lady Buffaloes’ basketball team garnered a pair of victories in the first two nights of action at the Roundball Classic, defeating Palmer Ridge, Colo., 49-40, using a strong second-half rally for the victory.

In the second night of the Classic, it was all Lady Buffs as they opened up an early lead and maintained it throughout en route to a 53-39 victory over Coronado, Colo. The finale on Saturday afternoon saw the Buffs fall to Class 3A state-ranked Scott City, 61-52. That leaves the Lady Buffs at 2-2 early in the schedule. 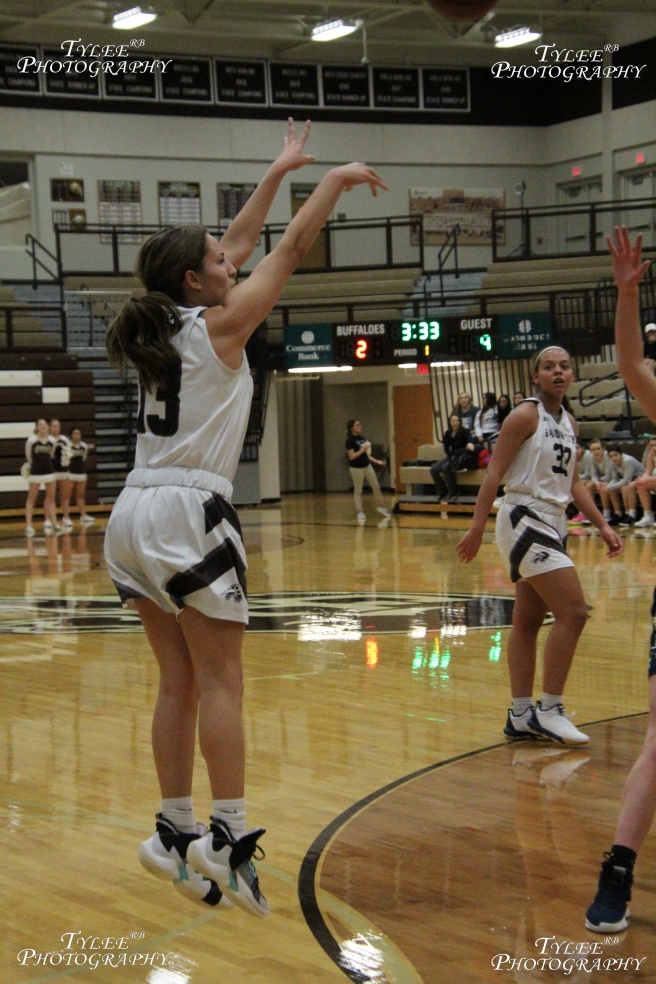 Julie Calzonetti, a junior forward, was voted to the Classic’s All-Tournament team, comprised of five players from amongst the six competing schools.

They will conclude their pre-Christmas break schedule on Friday, Dec. 20, with a road game at Bear Creek, Colo. Their first game after the holiday break will be Jan. 3 with a home game against Junction City.