Serrano, who had placed fourth a year ago in the unofficial state tournament, posted a 2-2 record in the one-day competition and finished her season with a 34-8 won-loss record.

She becomes the first GCHS girl to win a medal at a state wrestling tournament and will be among a core group of returners for the 2021 season.  Serrano had received a first-round bye in her 130-pound division based upon her regional title two weeks prior. 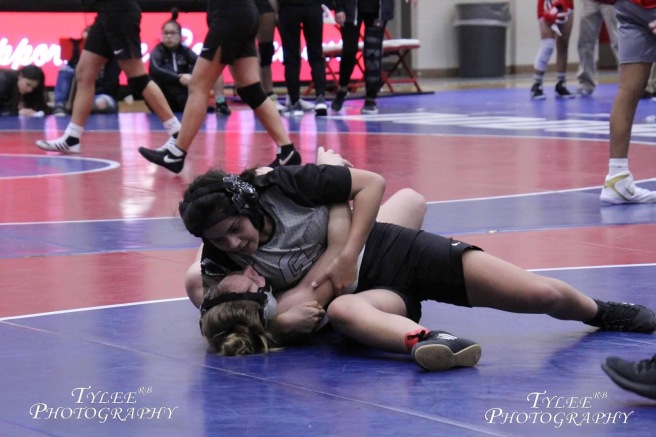 Serrano then defeated Kaitlyn Hain of Wellington by virtue of a pin at 2:22 of the second period. In the semifinals, she lost via a fall at 1:20 of the first period to Brianna Randles of Topeka-West. That dropped her into the consolation semifinal match where she lost a tough 3-1 decision to Marissa Porsch of Hoxie. In her fifth-place medal match, she pinned Amber Martinek of Silver Lake at 0:58 of the first period.

Senior Destiny Avila (18-10) opened with a pin of Shelby Kesler of Mission Valley at 5:44 of the third period. In her quarterfinal match, Avila lost by fall to Maritza Jimenez of Hutchinson at 1:51 of the first period. In her consolation round two scheduled match, Avila won by injury default just 44 seconds into the bout with Breanna Ross of Erie. In the Consolation round 3 match, she lost a 5-3 decision to Mikayla Konrade of Winfield to exit the tournament.

The remainder of the Lady Buffs’ roster all went 0-2 in their respective weights, with Esmerelda Corado (24-11) dropping matches to Amelia Jungwirth of Shawnee Heights and Olivia O’Donnell of Basehor-Linwood, both by falls. At 136 pounds, Belle Hernandez (16-9) lost a 6-0 decision to Ellington Hogle of Silver Lake and then dropped a tech fall match (20-4) to Cakia Tucker-Dunbar of Wichita Heights at 4:45 of the third period.

Chloe Sullivan (25-12) was qualified to compete at 101 pounds but missed weight in the Thursday morning weigh-in and was unable to participate. All of the Lady Buffs, except Avila, will return for the 2021 season.

Topeka-Washburn Rural won the team title with 84 points and Western Athletic Conference’s Great Bend was second with 80. Garden City’s 20 points put them in a seven-way tie for 22nd. There were wrestlers from 80 different schools competing.